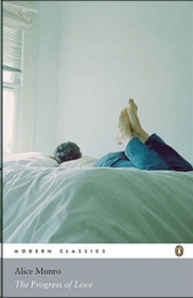 For all the details on The Storytellers Book Club, see my introductory post or Douglas Gibson’s website.

This update’s been a long time coming. I signed up for this CanLit challenge back in August. Alice Munro’s Nobel win inspired me to get cracking with The Progress of Love. I’m down to the wire here – I have till Dec. 31st to review a book club selection for a chance to win all five books, including selections from CanLit heavyweights Davies, MacLennan, MacLeod and Gallant. I’d tell you to get on it too, but with two days to go, you’re either in or you’re out by now!

The Progress of Love: Review
I was third in line for this book at the library for a couple of weeks, which is unusual for something published 25ish years ago. Must be that Nobel buzz! But you wouldn’t know this book is 25 years old. Munro’s stories are timeless, and you feel they could have been written 100 years as easily as 10 years ago.

The Progress of Love isn’t Munro’s most famous collection. It won the Governor General’s Award but her two Giller winners, The Love of a Good Woman and Runaway, seem to be the most well known. My only experience with Munro is Too Much Happiness, and with only that for a basis of comparison, The Progress of Love didn’t quite measure up. The first five stories were so good that the rest were slightly disappointing. My favourite was “Miles City, Montana” which shows us that the Mommy Wars are nothing new:

I had a dread of turning into a certain kind of mother – the kind whose body sagged, who moved in a woolly-smelling, milky-smelling fog, solemn with trivial burdens. I believed that all the attention these mothers paid, their need to be burdened, was the cause of colic, bed-wetting, asthma. END_OF_DOCUMENT_TOKEN_TO_BE_REPLACED

Is there a statute of limitations on monthly roundups? Let’s hope not! Already 20% into December (and #Middlemarch13,) so let’s do this.

Book Events:
40 Below Official Launch #1: I’m really impressed by the continued buzz around this local, indie book. I only attended one of the two official launches, but it seems everywhere I turn I’m hearing about a TV appearance, or seeing the book on the bestseller list – really well done, 40 Below crew!

Dani Paradis reads her contribution to 40 Below

I got my book signed straightaway by mastermind Jason Lee Norman and contributors Michael Hingston and Dani Paradis. Dani read her poem about her hippy parents, which may or may not be based on a true story.  There were a few awkward moments when people asked me to sign their books because they thought I was her – I guess I can see how brown hair + glasses + purple sweater + sitting as same table was confusing. I’ll take it as a compliment as Dani is much younger and more fashionable than I!

Vernon R. Wishart was my favourite reader. His story about his wife’s speedy Christmas Day labour and delivery was even funnier read aloud. I learned that it was a true story, as that Christmas baby, now in her 50s, was in the audience.

Don Perkins didn’t read, but he did write my favourite sentence in the whole book, and signed right next to it with a real fountain pen! Check out his take on the event here. 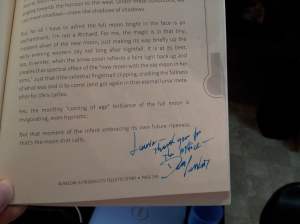 Before heading home, I bonded with fellow 40 Below reject Matthew Stepaniac and had a good chat about book blogging. Watch for a post very soon about his Bookstravaganza project.

(I also attended a little event with Margaret Atwood this month, which you can read about here.)

Books Read:
For once I actually posted about most of the books I read this month, thanks to Novellas in November and #ReadWilkie. Here are the two exceptions:

Books I Want to Read: 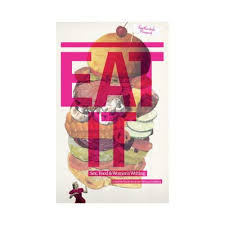 I suddenly have a slew of non-fiction books to read. I’ll probably wait till January to get to them, given my Middlemarch ambitions. Non-Fiction New Year? More about those later, but let’s give a quick shout-out to Eat It, a collection of women’s writing on sex and food, for having a great title. I also added On Beauty by Zadie Smith, my Classic Club Spin pick (was to lazy to do a post) and discovered it’s the only Smith book that doesn’t appear to even exist at the library.

Coming up on the blog:

In the interests of time, I’m skipping the list of blog posts that usually appears here. Tell me all of your December reading plans! Are they ambitious like mine, or are you taking it easy for the holidays?

[UPDATE: ECW Press has extended the contest deadline till December 31st. Plenty of time to review a few of these!]

The Storytellers Book Club is fascinating to me, because while it’s a blatant marketing ploy for Douglas Gibson’s book Stories about Storytellers, it’s also a great idea and very well executed (and remember, I work in marketing, so I have nothing against marketing ploys, blatant or otherwise.)

ECW Press gave me a copy of Stories about Storytellers by Douglas Gibson and The Watch That Ends the Night by Hugh MacLennan in exchange for writing this, so this is basically a sponsored post, but I am totally on board with the concept and think some of my CanLit-loving readers will be too.

So, here’s the deal. There’s a contest that’s valid up till the end of September, so if you want to get in on that, you best get reading.

Douglas Gibson and Stories About Storytellers

Douglas Gibson is kind of a CanLit editor to the stars. He’s worked with big-name Canadian authors that even non-readers have heard of, and public figures like Pierre Trudeau. Here’s the synopsis of his book, Stories about Storytellers:

“I’ll kill him!” said Mavis Gallant. Pierre Trudeau almost did, leading him (“Run!”) into a whizzing stream of traffic that almost crushed both of them. Alistair MacLeod accused him of a “home invasion” to grab the manuscript of No Great Mischief. And Paul Martin denounced him to a laughing Ottawa crowd, saying, “If Shakespeare had had Doug Gibson as an editor, there would be no Shakespeare!”

On the other hand, Alice Munro credits him with keeping her writing short stories when the world demanded novels. Robertson Davies, with a nod to Dickens, gratefully called him “My Partner Frequent.” W.O. Mitchell summoned up a loving joke about him, on his deathbed.

Stories About Storytellers shares these tales and many more, as readers follow Doug Gibson through 40 years of editing and publishing some of Canada’s sharpest minds and greatest storytellers.

Gibson has selected five CanLit Classics from Stories for The Storytellers Book Club:

I’ve read none of these. No Great Mischief was on my radar, as is everything by Munro, but I hadn’t even heard of MacLennan or Gallant, and I’ve been wary of Davies since I read Fifth Business in high school. This list is enticing to me because it’s challenging and not totally obvious. I appreciate representing female authors in this list (almost half! Progress!) though I must point out that the ratio of female to male authors addressed in the Stories About Storytellers book is abyssmal, a fact that Munro talks about in the introduction. END_OF_DOCUMENT_TOKEN_TO_BE_REPLACED