Fall Preview Part I was all about the books I’m excited to read. Today, we’re talking Edmonton literary festivals and giveaways.

Actually, three giveaways. Edmonton hosts three excellent literary festivals, and despite my grumbling about a lack of Word on the Street (but for real, Lethbridge and not Edmonton?) I am excited to get into festival season. Read on for my picks, and for your chance to win your way into three of my most-anticipated events!

I had a great time at my first LitFest last year and I’m super bummed that I can’t make it to any of these fine events. If I could, I would go to:

ya think? RT @drgrist Yeah, should have been more up front earlier that I haven't read the book yet. Just been reacting to the cliff notes.

LitFest is also running Words on the Square, in partnership with Edmonton Arts Council, bringing authors to Churchill Square at lunch time on Tuesdays to read and… well I’m not sure what else. I just have to run across the street to get there, so I’m in!

LITFEST GIVEAWAY: I have two tickets to the M.G. Vassanji event to give away! Just comment on this post and let me know you want the tickets. I may ask you to take my copy of The Magic of Saida and get it signed. If that’s cool with you.

I’m excited to attend the St. Albert Reader’s Festival for the very first time. I love that the focus is squarely on readers. Sometimes at literary events I feel like I’m the only one who’s not an author too. It’s weird.

I think I saw this mountain's orenda… pic.twitter.com/WdRvo2VehI

STARFEST GIVEAWAY: I have two tickets to the event of your choice to give away! Just comment and let me know which event you choose. Pick a back up if you want to see Boyden as it may sell out. Maybe reveal your own literary crush, too.

When Margaret Atwood is the appetizer, can the main course compare? Atwood and Alanis were here last year as a pre-festival event. Joyce Carol Oates is like the crazier, American version of Atwood (on Twitter, anyway) and I must find out for myself what she’s really like. My picks:

There are more controversial tweets, yes, but to book bloggers, dissing Jane Austen is a throwdown:

Austen's satire invites reader to feel comfortably superior to her foolish people but not to dislike them. Comedy of (Christian) charity?

FESTIVAL OF IDEAS GIVEAWAY: I have two tickets to Joyce Carol Oates to give away! Just comment and let me know you’re interested. Maybe tell me your favourite JCO book, or link to her craziest tweet.

Did you catch all three giveaways in this post?

You can say you’re interested in more than one. Go for all three if you like! I’ll do a random draw for each pair of tickets and announce the winners on Friday, October 3. No airfare or hotel, I’m afraid, so make sure you’ll actually be in town. I’m not going to make you subscribe to my blog, or follow me on Twitter, or share this post, to enter. You should definitely do all those things, though.

Thank you LitFest, STARFest, and Festival of Ideas for generously providing these prizes! I’d love to hear what you’re looking forward to this festival season, whether you’re in Edmonton or not.

I’ve been working away at a Year in Review mega-post for a while now, but realized if I wait to finish the whole thing, it’ll probably never get posted. So I’m posting it in pieces. Here’s a fun one to start with. Literary crushes: Not just for Twilight Moms.

This is also probably a good place to announce that I won a Bare it For Books calendar. So this list might grow after I receive it!

Author Crushes
1. Michael Ondaatje, which I already embarrassed myself about here. Let’s just revisit this classic pic, and please do check out the source, the Can Lit is Sexy tumblr. 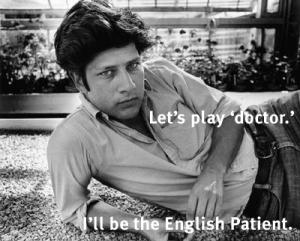 Via http://canlitissexy.tumblr.com which you should all visit immediately

2. Anton Chekhov. I was looking at some Wikipedia page about Russian authors, probably trying to determine if there were any women writing in the 1800s (seems not) when something caught my eye. It was Anton with his excellent hair and bone structure, and let’s just ignore the beard. If Bangable Dudes in History was still updating, I would submit this in a second.

3. Joseph Boyden. The lovely folks at Penguin Canada are sending me a copy of The Orenda so I can finally join in the award-snub outrage! In the meantime, check out Joseph’s holiday message for the Penguin Delights campaign – great smile, no pants, yes please:

1. David Slaney from Lisa Moore’s Caught. David is one of those people who can seduce you by walking into a room. There’s a memorable scene where he is hiding from the police in a bride’s hotel room. She’s minutes away from walking down the aisle, and while they don’t, they come so close… dang.  In my head, David looks like James McAvoy circa The Last King of Scotland:

2. Jimmy from Margaret Atwood’s Oryx and Crake. The secret’s out: Part of the reason I love O&C so much, and wasn’t as into the other Maddaddam books, is that I have a massive crush on Jimmy. Unlike David, who could have anyone, Jimmy only preys on vulnerable women. He’s got a massive inferiority complex. Mommy issues abound.  He’s awful, actually. I’m not sure what this says about me. If I were casting Jimmy, I’d go with 12 Monkeys era Brad Pitt. You know, a little dirty, a little crazy.

So, fess up: Who were your literary crushes this year?