For a little more in the way of background info, check out my literary festival preview post.

I wasn’t going to go to LitFest but I happened to see a free preview of Ted Bishop’s talk about his book in Churchill Square. The free talk was not well attended but the actual event was full of well-wishers. I already wrote about it here but I didn’t tell you about the cool fountain pens we got to try out afterward (cool is a relative term, of course, I assume if you’re reading this you might think it’s cool.) This is my second year attending LitFest and it won’t be my last. I hope LitFest continues the free talks on the Square. If you need to make a business case about return on investment, well, it sold me. That’s something!

The straight review: STARFest well organized, well attended, and well worth the price of admission. I was there to see Joseph Boyden, who did the standard reading from his latest novel, and chose one of my favourite sections from The Orenda (the first few pages) and he talked about the standard author-appearance stuff – inspiration, research, how the book fits into his larger body of work. He also talked about the tragedy of missing and murdered indigenous women in Canada (I was surprised he didn’t mention his new anthology on the subject, Kwe) and his own struggles with depression as a teenager. He gave a detailed description of his next book, which sounds like a bit of a legend or fairy tale about residential schools.

The gossipy review: Host and author Diana Davidson stunned in a royal blue dress from The Bay. Classic in a black button up, celeb author Joseph Boyden was powerful, vulnerable, and fascinating. Spotted in line at the book signing: Jason Purcell, noted Book Tuber, surrounded by admirers and on-trend in florals; star-struck Glass Buffalo editor Matthew Stepanic, and festival organizer Peter Bailey. I thought I got a “scoop” when Peter mentioned that David Eggers was coming to Edmonton, but he misspoke and meant David Sedaris, which is still pretty exciting!

The honest review: Joseph Boyden talked to me and touched me and said I was pretty. The end. 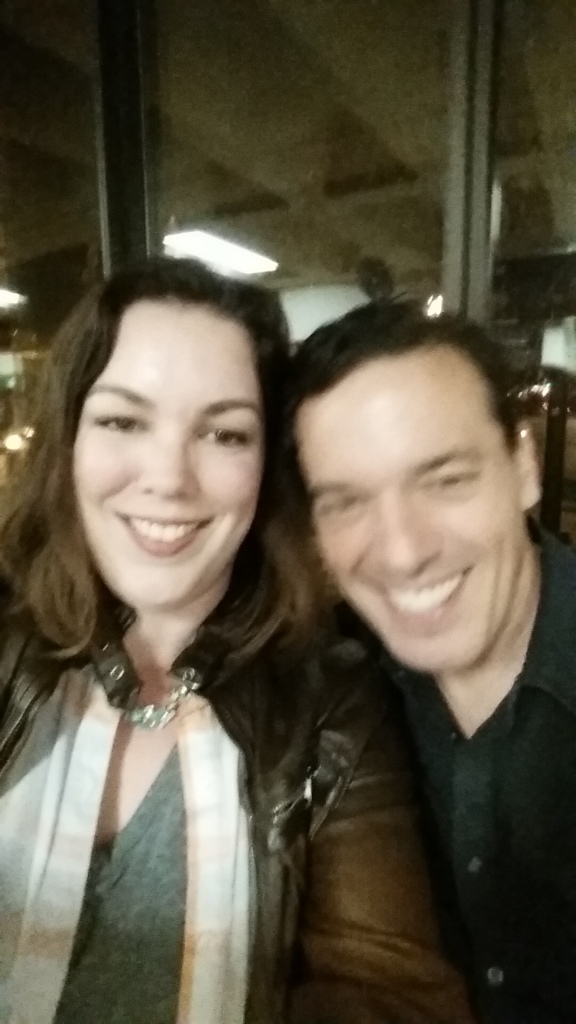 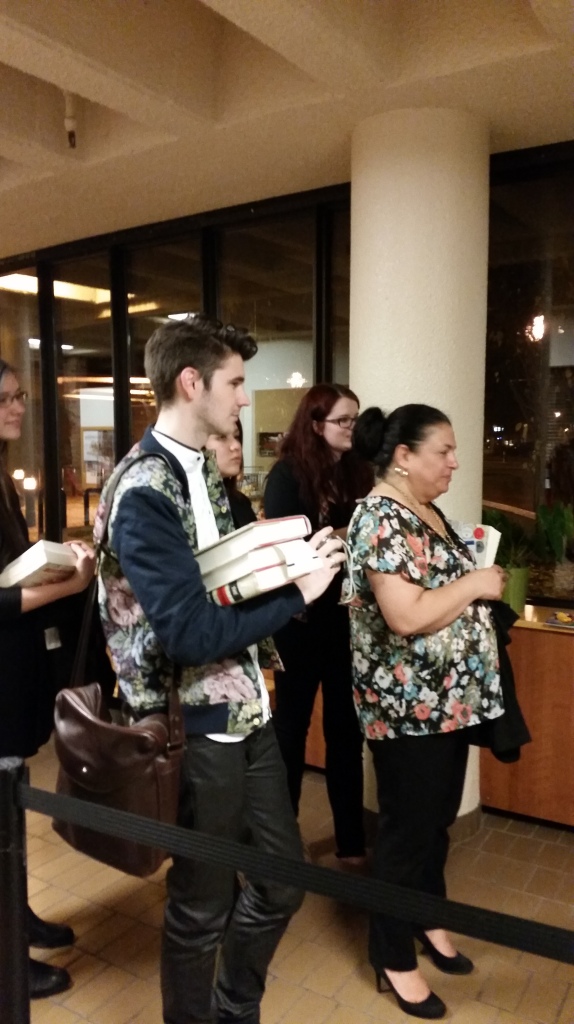 The closing night of Festival of Ideas was kind of the opposite of STARfest: It was under-attended (the Winspear was strangely empty; I hung back but there were plenty of floor seats available) and while I did see people I knew, I didn’t play the gossip columnist this time, preferring the company of Bartelby the Scrivener while I waited for the main event. Oates was less vulnerable than Boyden too. I doubt she went too far off script, though she joked with host Eleanor Wachtel that she felt like she was in a therapy session. Her life story was fascinating. I was rapt as JCO described her relatives and ancestors, because they sounded like characters out of a novel. Murders, suicides, Jewish grandmothers who concealed their ethnicity in America, growing up blue collar and going on to be a student and then professor Princeton… sounds like an American family saga to me.

Oates is arguably one of the best known authors in the world, but the signing line was calm, orderly, and short. I’m not sure why she wasn’t a bigger draw – maybe we are just that loyal to our #CanLit stars. I was still pretty nervous about meeting her. I didn’t want to freeze up like I did with Margaret Atwood. I remembered she had talked about personas, so I asked if her Twitter account was the real her or a persona. She said it’s very close to the real thing, except, of course, when her cat Cherie takes over:

An aside: I was so wrapped up in thinking of my question, that I couldn’t figure out why the man ahead of me in line looked so familiar, until he was getting his booked signed and I heard him say his name. It was Mr. Jeffries, my high school English teacher, who taught me One Hundred Years of Solitude, and Heart of Darkness, and John Donne, and The Odyssey, and was always going on about Joseph Campbell. I didn’t think that much of him while I was in school because I didn’t think much of anything at that age, but I recognize now that those classes had an enormous influence on me as a reader and now as a writer. I missed my chance to say thank you, so thank you, Mr. Jefferies.

Other bookish happenings this fall 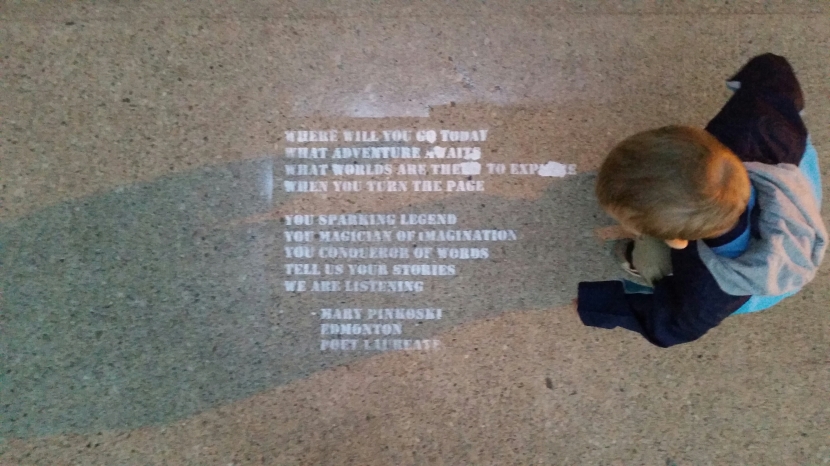 A concrete poem outside my kid’s school by @onelastpoem

The Great Edmonton Bookswap at The Atery

Some of the books at the Bookswap – OTHERLAND is awesome!

A restrained book haul from the fall library sale

The local author shelf at Tix on the Square

I didn’t see these guys, but they look alright

Fall Preview Part I was all about the books I’m excited to read. Today, we’re talking Edmonton literary festivals and giveaways.

Actually, three giveaways. Edmonton hosts three excellent literary festivals, and despite my grumbling about a lack of Word on the Street (but for real, Lethbridge and not Edmonton?) I am excited to get into festival season. Read on for my picks, and for your chance to win your way into three of my most-anticipated events!

I had a great time at my first LitFest last year and I’m super bummed that I can’t make it to any of these fine events. If I could, I would go to:

ya think? RT @drgrist Yeah, should have been more up front earlier that I haven't read the book yet. Just been reacting to the cliff notes.

LitFest is also running Words on the Square, in partnership with Edmonton Arts Council, bringing authors to Churchill Square at lunch time on Tuesdays to read and… well I’m not sure what else. I just have to run across the street to get there, so I’m in!

LITFEST GIVEAWAY: I have two tickets to the M.G. Vassanji event to give away! Just comment on this post and let me know you want the tickets. I may ask you to take my copy of The Magic of Saida and get it signed. If that’s cool with you.

I’m excited to attend the St. Albert Reader’s Festival for the very first time. I love that the focus is squarely on readers. Sometimes at literary events I feel like I’m the only one who’s not an author too. It’s weird.

I think I saw this mountain's orenda… pic.twitter.com/WdRvo2VehI

STARFEST GIVEAWAY: I have two tickets to the event of your choice to give away! Just comment and let me know which event you choose. Pick a back up if you want to see Boyden as it may sell out. Maybe reveal your own literary crush, too. 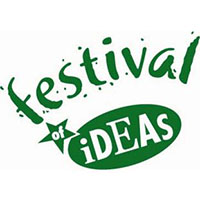 When Margaret Atwood is the appetizer, can the main course compare? Atwood and Alanis were here last year as a pre-festival event. Joyce Carol Oates is like the crazier, American version of Atwood (on Twitter, anyway) and I must find out for myself what she’s really like. My picks:

There are more controversial tweets, yes, but to book bloggers, dissing Jane Austen is a throwdown:

Austen's satire invites reader to feel comfortably superior to her foolish people but not to dislike them. Comedy of (Christian) charity?

FESTIVAL OF IDEAS GIVEAWAY: I have two tickets to Joyce Carol Oates to give away! Just comment and let me know you’re interested. Maybe tell me your favourite JCO book, or link to her craziest tweet.

Did you catch all three giveaways in this post?

You can say you’re interested in more than one. Go for all three if you like! I’ll do a random draw for each pair of tickets and announce the winners on Friday, October 3. No airfare or hotel, I’m afraid, so make sure you’ll actually be in town. I’m not going to make you subscribe to my blog, or follow me on Twitter, or share this post, to enter. You should definitely do all those things, though.

Thank you LitFest, STARFest, and Festival of Ideas for generously providing these prizes! I’d love to hear what you’re looking forward to this festival season, whether you’re in Edmonton or not.