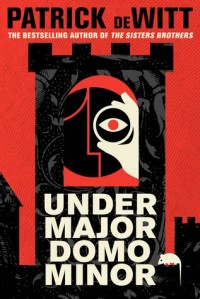 Publication date: September 5, 2015
My rating: ?? out of 5 stars
Read this if you like: Dark comedy, dark fairy tales, darkness, happy endings
Check out Undermajordomo Minor on Goodreads
Thanks to: House of Anansi Press for the review copy and CJ for the “in.”

Patrick deWitt writes some weird shit. His writing has been described as dark, intense, grim, poetic, bold, and funny. Undermajordomo Minor is all of those things, but also nothing like his previous two novels, Ablutions and The Sisters Brothers. The covers all look the same, and the title plays with opposites in the same way The Sisters Brothers did (brother/sister, major/minor) but if you are expecting The Sisters Brothers set in a castle, or Ablutions with a butler rather than a bartender, hoo boy, you better sit down.

You may have heard a few things about Undermajordomo Minor. Did you hear about the thing with the rat? Did you hear about the thing with the cake (actually a tart, but I first heard about it as “that cake fucking scene”?) I heard those things and thought, oh yeah. Classic deWitt. Remember those weird “intermissions” in The Sisters Brothers, where some dream-like stuff happens and you were like “huh?” but it all kind of added to the atmosphere and general quirkiness of the story, so you let it slide? Remember the awful sex scene in Ablutions (not that one, the other one,) and you were like “ew,” but it seemed to fit with the general seediness and debauchery and so you let that slide, too? The rat thing and the tart thing are not like that. They do not let you make excuses or assumptions, they make you stop and say “what the fuck did I just read?” And there are other things like those things too. Unlike the first two books, Undermajordomo Minor doesn’t give you much of a foothold before throwing you into the weird.

Undermajordomo Minor does not lend itself to assumptions about authorial intentions, either. With the first two novels, it’s pretty easy to come up with deWitt’s purpose – not that you’d be right, necessarily, but it’s pretty easy to say that yes, wasn’t The Sisters Brothers a wonderful subversion of genre fiction? Didn’t you love his fresh take on the traditional Western? And it’s easy to think that Ablutions was autobiographical, a portrait of the artist as a young bartender, a novelist being born, literally “notes for a novel.” But Undermajordomo Minor? Here are some of my half-baked ideas about what deWitt is “doing” here:

I have no clue what deWitt is going for with Undermajordomo Minor, and that’s a pretty rare thing. Contrast this with Franzen, say, where you know exactly what things he’s commenting on, because they’re the things he always comments on. 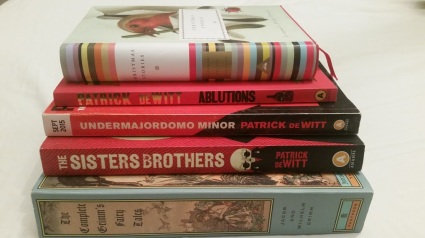 I don’t know where I’d classify this book. I don’t know who I’d recommend it to. I don’t know how many stars to give it. I know that I enjoyed the reading experience, which is not the same as “liking” the book. I know that the ending made me smile and I still think about it. The ending didn’t provide closure, quite the opposite; when I think of Lucy now, he is still on a journey, and still on the best part of a journey, still anticipating, and I still think something (else) is going to happen when he arrives.