I love statistics. You’re probably sick of them by now, what with the many end-of-year blog posts, but I love how they’re both meaningless and mean everything; how “numbers don’t lie” but they can tell whatever story we want them to tell. Here are the numbers that made up my year of reading.

…but first, a public service announcement: Goodreads has a sweet stats thiny that shows you how many books you’ve read, how many pages you’ve read, how you rated your books, and more! Go to “My Books,” then “stats” which is on the left side in tiny font, then click “details.” It’s magic! Here’s mine. You can also export your books to Excel to do EVEN MORE analysis – click “import/export” in that same tiny, left hand menu. 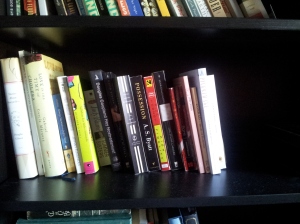 I knew my reading picked up after I finished Moby-Dick this summer but I didn’t realize the extent till now. I never thought I’d read 50 books in a year, but it looks like I could reasonably go for 75 next year!

I didn’t restrict myself to female authors this year, but I did stack the deck a bit by choosing female authors on the Classics Club list, and, by accepting review copies from independent presses – I have a feeling that female authors are over represented in smaller publishers. I won’t set any specific goals for next year, but I’d love to read more books by minorities.  I’m sure I’ll still read lots of CanLit, butI gotta read some more World Lit too, beyond the States and the UK. Anyone got any good world lit reading challenges happening? I’ll probably do the Russian Lit one but would love to broaden my horizons even further…

Compared to the average Goodreads rating…

And now, on to the good stuff: my best and worst reads of the year!

Conveniently, they form a top ten:

The fact that I read two romances and gave two one-star ratings is not a coincidence.

I don’t do a lot of five star ratings for new books and new authors. I need to see if they’ll stand the test of time. I read a lot of new authors this year and many were on the cusp… if Goodreads allowed .5 ratings they would have got a 4.5.

Best Book of the Year

The Cat’s Table by Michael Ondaatje!

Look, he wrote my favourite sentence and was my biggest crush of the year so obviously Mr. O is taking the prize. The strange thing is that there is a whole section of this book I didn’t like – all the stuff about his married life – and I still love this book more than anything else I read this year. It was simple and poetic where I was expecting dense and intellectual. It was a breath of fresh air. Challenge for next year: The English Patient!

Check out my other 2013 review posts: