Check out Another Book Blog for the low-down on this book blogger edition of Secret Santa.

Unlike Rick, I’ve participated in many Secret Santas over the years, with varied results. But you can’t really go wrong with an all-book edition. This one is a little different in that we’re not buying anything, just suggesting (strongly) that another blogger read a particular book, and then do a guest blog post about it. Here’s who is participating:

Here’s the lucky blogger who gets a personalized book recommendation from moi:

Heather from Between the Covers!

When I drew Heather’s name, I started panicking. She’s read everything. She’s not bound by genre or location or style. She reads classic and contemporary. And she reads at an astonishing pace. Creeping her Goodreads page, I estimate she reads anywhere from ten to TWENTY FIVE books per month. So how the heck am I going to recommend something she a) hasn’t already read, b) wasn’t going to read anyway, and c) will actually enjoy?

Rick and I were joking about making Heather read Fifty Shades of Grey because I’m pretty sure she hasn’t read that one yet. But I decided not to be cruel. THEN I thought maybe I’d have her read something a little risque, but classic, like Tropic of Cancer, but decided I don’t know her well enough to make her read the “C word” that many times. Finally, I settled on something totally unrelated to all that: 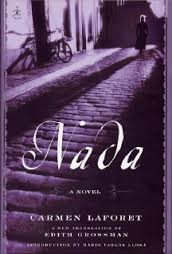 Nada is an obscure book that deserves so much more attention than it gets. At least, it’s obscure in North America – I imagine it might be a little more well known in Spain, where it was first published in 1945. Translated to English in 2007, it’s critically acclaimed, but hasn’t really found an audience here yet. Maybe once everyone’s done gushing about Stoner, they can move on to this underrated classic.

Nada was on the “staff recommend” shelf at my local library back in 2009. I’d never heard of it – then or since – and grabbed it on a whim. It turned out to be the last “serious” book I read for an awfully long time, as I was struck down with pregnancy brain (it’s real!) shortly after, and began a months-long reading slump that indirectly lead me to start this blog. So this book is really special to me!

One of the most important literary works of post-Civil War Spain, Nada is the semiautobiographical story of an orphaned young woman who leaves her small town to attend university in war-ravaged Barcelona. Edith Grossman’s vital new translation captures Carmen Laforet’s feverish energy, powerful imagery, and subtle humor. Nada, which includes an illuminating Introduction by Mario Vargas Llosa, is one of the great novels of twentieth-century Europe.

It’s a coming of age story, it’s dark and gothic, and it’s beautiful. It’s written in such a modern voice, too – I kept having to remind myself that it was written in the 40s. If you’re not impressed yet, the author was only 23 years old and this was her first novel. I’m close to convincing myself to give it a reread!

Heather, I hope you enjoy this book as much as I did. I’m very excited to have you guest post on the blog! Merry Christmas!