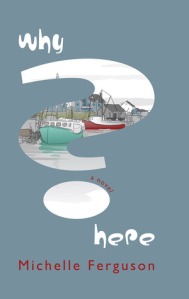 Why Here? by Michelle Ferguson | Published in 2013 by Borealis Press| Source: Review copy from the author

Potato Island, Nova Scotia, is a quiet place sheltered from the problems of the outside world. When Ian McKendrie, a young man from Toronto, arrives and begins selling the products of his small meth lab, the Islanders are anxious to rid the Island of this scourge.

The judge in Halifax sees things differently. He sentences McKendrie to house arrest on the Island with conditions that seem no punishment at all. So, when an opportunity presents itself, the Islanders decide to take the law into their  own hands and impose a few “conditions” of their own.

I have an appreciation for drug stories that goes back to Evelyn Lau’s Runaway, read as a preteen and before I’d smoked a cigarette, let alone anything else. By the time I saw Trainspotting at seventeen, I’d done plenty. My parents objected to renting the movie because it glorified drug use, but it actually scared me off trying hard drugs. The “baby on the ceiling” hallucination scene may look kind of ridiculous by today’s special effects standards, but it was a pretty effective deterrent in my case.

Other drug and addiction books that I love: The Basketball Diaries, Heather O’Neill’s Lullabies for Little Criminals, Fear and Loathing in Las Vegas, A Clockwork Orange, Go Ask Alice, every other Irvine Welsh books I’ve ever read. Oh, and Spun, which is a movie but relevant because it’s specifically about meth and absolutely horrifying. So that’s my frame of reference.

Why Here? is a a drug story. Addicts, dealers, and law enforcement dance around each other in a tiny isolated community, till the community’s had enough and regular folks turn vigilante.  The premise is very similar to Ferguson’s first novel, From Away (my review), but this story succeeds in ways that From Away didn’t – the writing is fresher, and the stakes are higher. I really like how the older adults were the heroes; not the twenty-something drug dealers or the teenage drug addicts, but the people in their 50s and 60s who’d had enough. And the ending was great. I almost thought it was headed towards the “special moment” 90s sitcom ending, but then it was suddenly open ended and hopeless or hopeful, depending on your perspective.

Ferguson took some risks; however, the story just isn’t gritty enough. All those drug books I’ve read have given me certain expectations. I want devastating relapses, and sweaty, hallucinating withdrawals. I want the manic filth of “Spun.” I want Trainspotting‘s baby on the ceiling. I needed something harrowing or horrible to believe that this community would take the law into their own hands. That, or I need a strong lead character to hang that belief on, and I didn’t quite find that in the ensemble cast.

After two books with similar settings and themes, I’m left wondering about the author’s intentions. Are these morality tales? Celebration or condemnation of small town, maritime culture? I await Ferguson’s next move.

Thank you to the author for the review copy!

I ended up watching a bunch of scenes from Spun while writing this review. As stylized and dated as this movie is, it’s worth a watch.