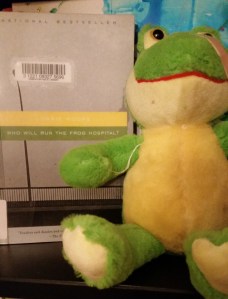 A literal take on the title: Who Will Run the Frog Hospital? by Lorrie Moore

The month’s coming to an end, so the updates will be fast and furious. Check out my introductory post here, and follow along with participants The Wandering Bibliophile and Write Reads.

I had high expectations for James Baldwin after some coverage of his book Another Country on Booktube, and Giovannis’ Room did not disappoint, but, my enthusiasm waned near the end of the book. It was such a strong start, with a voice and a character who was so immediate and believable but still somehow removed – David’s name is hardly ever used in the book, and I would often forget his name altogether – and the back story about his family is so touching. Somehow, the sordidness and violence that come later just didn’t do it for me (and I appreciate sordidness and violence in fiction!)

I would compare Giovanni’s Room to The Great Gatsby and Bonjour Tristesse in both form and content. All three  pack so much into so few pages. All three have captured their home countries’ imagination. All three are about sex and class and people who are never quite enough. This won’t be the last Baldwin book I read.

Oh, and I learned that France only stopped executing people by guillotine in 1977. I thought the references to the guillotine were symbolic or metaphor or something at first. Yikes.

Rip Van Winkle is a cute story. I chose it because it was the basis for a plot arc on Classic Alice, but I didn’t get much out of the story or those episodes of CA. It’s good knowledge to have though; how many people know anything about Rip Van Winkle other than he slept for a long time? I thought he was supposed to have slept for a hundred years or something, but it was only twenty. The whole thing was about the American Revolution. Also, there were ghosts getting drunk and bowling. I did not know that.

I would recommend it to anyone interested in this time period, or American literature. Check out a free version. It’s funny and very short.

Who Will Run the Frog Hospital? by Lorrie Moore
My rating: 4/5 stars
Goodreads

Sometimes I wonder if teenage pregnancy is a very common topic in literary fiction, and that’s why it comes up in books I read so often, or if I’m somehow drawn to these books. Either way, these stories tend to work their way into my heart. This one sure did.

Berie and Sils were too young for all the good stuff that happened in the late 60s, and are stuck coming of age in the time of Vietnam and Nixon. They’re just the same age as my parents, actually, and I too relate – my parents just missed Woodstock, and I just missed Woodstock 94 (the latter’s probably a good thing.) The struggles are the same, though – I kept placing the story in the 90s, rather than the 70s, because it felt so immediate and relevant to my teenage years.

This is a coming of age story, but we get a glimpse of Berie as a young adult, reunited with Sils at their 10 year high school reunion, and another look, just a flash, really, of Berie as a middle aged woman with an unfaithful husband. There’s a sense of disconnection between these three version of Berie, but the story never feels disconnected.

I hesitated when rating this book 4 stars. It’s really a 4.5, or a 4.9. I love that moment when you read a big name author for the first time and you GET IT immediately. Lorrie Moore is the real deal. Highly recommended.

Tell me, are you Novella-ing this November? What are you reading?