With astonishing range and depth, Scotiabank Giller Prize winner Lynn Coady gives us nine unforgettable new stories, each one of them grabbing our attention from the first line and resonating long after the last.

Equally adept at capturing the foibles and obsessions of men and of women, compassionate in her humour yet never missing an opportunity to make her characters squirm, fascinated as much by faithlessness as by faith, Lynn Coady is quite possibly the writer who best captures what it is to be human at this particular moment in our history

I apologize for posting the following self-congratulatory tweet, but for book bloggers, I don’t think it gets better than being acknowledged by an author you love. The Giller Prize’s Twitter account asked us to review a long-listed book in 13 words exactly: 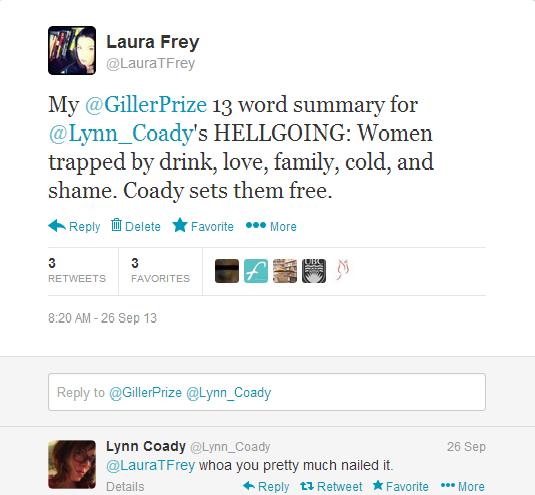 It’s true, though, “trapped” was the first word that came to mind after reading this collection. Reading these stories was uncomfortable and claustrophobic. I was literally squirming at times. Coady gets us so close to her characters, it’s almost embarrassing, and I have a real problem with vicarious embarrassment. I’m one of those people who have to change the channel when a character is too exposed, or being made a fool of.

The first and last stories were the strongest. Maybe that’s just primacy bias, or maybe it’s my own experience that made these stories devastating – the first is about an alcoholic, the second about a teenage pregnancy, both topics that tend to punch me in the gut.

“Wireless” opens with a hangover, and it’s one of the best descriptions of one I’ve read:

She lay flat on her back for twenty minutes, gauging the pain, the depth of her dehydration. The song in her ears. She sat up, and a second later her pickled brain slid back into its cradle in the centre of her cranium. Time to throw up.

I haven’t had a hangover in five years and reading that made me shudder. The whole story is disconnected and fuzzy, like that poor, pickled brain. What’s with the two mentions of Beanie Babies? What’s with the title? What’s the deal with Ned, the man Jane meets, another alcoholic who is lying to her for unknown reasons? We never find out.

The last story is “Mr. Hope,” and it’s another strange one. This is the one that really prompted my “uncomfortable” response. There’s something off about the whole thing and I can’t figure out what. Is it because the narrator refer’s to her teachers large belly as his “D,” as in the shape of a “D,” given the (gross) internet meme thing “she wants the D?” Because the way Mr. Hope interacts with the kids is kind of age inappropriate, and you wonder what else inappropriate is going on? Like this scene, where he is inexplicably trying to force a grade one class to come up with a definition for “love:”

“You: gap-tooth.”
“Love is when you hold a puppy.”
Mr. Hope slammed his fist against our sweet-faced grandma-teacher’s desk.
“LOVE IS NOT,” he bellowed, “WHEN YOU HOLD A PUPPY.”
Behind me, I could hear someone’s breath hitching rapidly in and out and I tried to shush whoever it was as quietly as I could.
“Where is it?” Mr. Hope demanded to know. “What is it? Think about that, people. You’re all so sure about this thing, and you can’t even answer the question. I’m not asking you when it is. A rock is a small hard round thing. Okay, that’s not great, but at least it’s a start. So what kind of thing is love? Big or little? Soft or hard? Black or white? Or coloured?”

And it gets more awkward from there. I reread this story in it’s entirety for this review, and it struck me differently this time. That’s the great thing about these stories – they’re ambiguous, not in an unresolved way, but in a way that you can read into differently each time.

A few of the other notable bits include:

Some of these stories stuck with me. Some of them made little impression at all. I want to see what Coady can do with a novel-length story. I know, it’s probably a book-snobbish way to think, but it’s true. Rather than the recent and critically acclaimed The Antagonist, I want to start with Strange Heaven which sounds right up my alley. Another story about a teenage mom – I really should branch out.

The Giller Effect
Reviewing the book’s Goodreads page, I was surprised to see only 101 ratings. The Giller Prize was announced a few weeks ago, and the long and short lists have been out for months. I’m not sure if Goodreads ratings is a valid criteria, but it’s easy to do a few comparisons:

The other 2013 shortlisted titles have around 100 ratings each too, so maybe they just need more time. Though somehow long-lister Claire Messud has nearly 10,000 ratings for The Woman Upstairs!

To ensure this wasn’t a Canada thing, I checked out the recent National Book Award recipient Good Lord Bird – 500ish ratings. Maybe people (or, more specifically, people who are active on Goodreads) don’t give a shit about award winners. Compare (and weep) with Dragon Bound’s 15,000 ratings.

As for whether or not Hellgoing  deserved to win, well, you’ll have to wait for my review of Caught for my final thoughts. I only read these two, so I can’t weigh in on the travesty of The Orenda not making the shortlist. Totally a coincidence that I read the two female authors on the shortlist too, I swear!