When you think about memory, do you think of the distant past? In CanLit, many classics are written from the perspective of a character at the end of life, remembering. The Stone Angel comes to mind. It’s a popular frame for contemporary authors too. Carrie Snyder’s Girl Runner, for example, or Michael Ondaatje’s The Cat’s Table.

These days, I’m more interested in the beginnings of memory.  My boys are three and five. What can you remember of these ages? At three, maybe nothing. Maybe a still image or someone’s voice. At five, you start to make sense of things. You remember chains of events. It’s pretty heavy, this sudden ability to remember and integrate and communicate your own life story. And as parents we wonder, how will my kids remember me?

With babies and toddlers, we’re afraid that we’ll do something to put our children in danger. We’re sleep deprived and don’t know what we’re doing. A couple years in and you realize: they survived. It’s okay. You think it’s about to get easier, now that they’re in school and potty trained (almost.) But it’s not easier. I was recently in a parenting class. Triple P, if you’re interested, and yes, I’d recommend it. The participants ranged from people like my husband and me, who’re basically okay, but run ragged and looking for some help, to people who are really floundering and some who were probably compelled by the court to be there. The thing that struck me is that we all had similar issues, and we all, with perhaps one exception, had at least one child in the three to five range. I think (part of) the reason these ages are so hard and so fraught is that we are starting to feel a whole new kind of fear: the fear of being remembered as something less than a perfect parent.

Maybe it’s coincidence that I’ve read a couple books lately that teeter on this edge of memory, but each of these helped me understand my kids and my fears.

I thought I was afraid to read Claire Cameron’s The Bear because it’s a kids-in-danger story. I was tempted to flip ahead several times, to make sure Anna and Stick were alright (couldn’t indulge as it was an ebook,) but what really got me was five-year-old Anna’s memories of their parents.

Parenting media (ugh) tells us how to be afraid that something will happen to our children. They’ll be stolen from you if you turn your back for an instant. They won’t make it in life if you don’t interfere in their education. The Bear makes you confront the fear of something happening to you. We assume our kids need us – not just any adult, but specifically us – to survive, even though it’s clearly not true. We want our kids to remember us and carry on our legacies.

The Bear reminded me that, even at three and five, my kids are not just extensions of me. They can survive without me. And, that even if they don’t remember me the way I wish to be remembered, if their perception of me doesn’t match my own, it’s okay. It’s more than okay, it’s a necessary part of growing up. Kids can’t just be a mirror of their parents.

The Bear wouldn’t have worked if Anna hadn’t been old enough – just old enough – to remember her mom’s instructions, and her dad’s stories about the tail of the moon, and her brother’s tendency to run away and hide. Without any of that, she and Stick wouldn’t have made it off the island. But they also wouldn’t have got very far without Anna’s misinterpretations or her flights of fancy which reminded me so much of my five year old’s. Anna relies on memories of her parents’ but she relies on herself an awful lot too.

If you’re scared of this book too, well, you should be. There’s some hope for us parents, though. Without her parent’s quick thinking when the attack happened, and without the foundation of trust Anna obviously had, she wouldn’t have survived. Her parents mattered. They are remembered.

Sometimes being too young to remember is a blessing. In Maurice Mierau’s Detachment, Mierau and his wife adopt two boys from the Ukraine – ages three and five. In The Bear, I wept for Stick because I knew he wouldn’t remember his parents. For Peter, the five year old in this story, his memories of an unstable home life and then an orphanage are a burden, and might have triggered his detachment disorder. Three year old Bohdan doesn’t remember anything before the orphanage. The difference between the boys and their ability to settle into life in Canada highlights the power of memory, and vulnerability kids have at these particular ages.

Unlike The Bear, we hear from the adoptive parent in this case, which doesn’t mean it’s 100% reliable narration. I was often wondering, “what would your wife say about this” of “what do Peter and Bohdan think about this now, ten years later?” This being non-fiction, people have asked – Miereau wrote about the strong connection readers have with this book in The National Post and I admit I felt like writing him an email too!

There’s a subplot about Miereau finding his own family history in the Ukraine which means we get memories flowing from all directions – none of those memories being his, exactly, but I recognize the urge to gather it all together and make it make sense. This book taught me about patience and listening and that we never have the full story, at age three or five or thirty five. 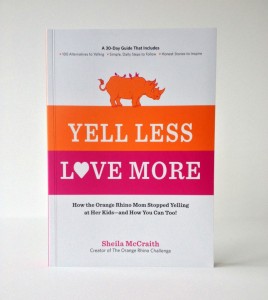 This blogger-turned-author, known online as The Orange Rhino, shares an “a-ha” moment that forced her to admit that she was a yeller, and it was not okay. Thinking she was alone in the house, she unleashed on her four kids one day. Nothing I wouldn’t have done in the same circumstances (and half as many children.) The momentary relief turned to shame when she realized her handyman was in the house and heard the whole thing. Her epiphany was based on wondering why it was acceptable to yell at children when you’re at home alone but not in front of an audience. What struck me is that her kids were all under the age of five – that is, approaching the onset of enduring memories. Do you want your children to remember you yelling and screaming? Suddenly everything is higher stakes when your audience can remember and communicate.

I do hope to write a full review of this book, but in the meantime, yes, Yell Less Love More worked. Since January 6 I’ve had two slip ups. Not yelling hasn’t magically fixed all my other problems, and actually illuminated some new ones, but it feels good. And I hope it goes a little ways toward being remembered by my boys, if not exactly as a perfect mother (whatever that means,) then as someone who was quiet enough to listen and calm enough to go to for comfort.