Come Barbarians languished on my shelves for months, despite the fact that I attended the book launch and was immersed in a rather impressive media campaign that included digital billboards and bus shelters (for a book! For a LOCAL book!) I was afraid of a couple of things:

I got a kick in the butt from #yegbookclub, a monthly Twitter chat dedicated to an Edmonton-authored book. Come Barbarians was the first selection, and I started reading the next day.

Around this time, I listened to an interview with Todd on The Next Chapter wherein he reminded me of his BOOK CLUB PROMISE (his caps, not mine,) including “magical” hummus and “ninja vacuuming” and I knew what I had to do. I rounded up a few of the Edmonton book bloggers and created an impromtu book club. On to the reviews!

The Book
4 out of 5 stars
Goodreads

In addition to the reservations listed above, I had a feeling Come Barbarians wasn’t the right place to start with Babiak’s work. Come Barbarians is a departure, a genre book, a political thriller; whereas his earlier stuff is (I understand) funny, smart, and literary. I’ve had my hand on Toby: A Man several times (That’s What She Said) but never took the plunge.  It doesn’t really matter, though. A good book is a good book.  I’m glad I read this one first. It was surprising and dark, action-packed and violent, but also contained and cerebral.

I feel like this one could have been called Kruse: A Man (though I’m glad it wasn’t) because despite the action and intrigue, it’s a character study and a mediation on what makes a “good” man. Is it being good at something? What if the thing you’re good at is basically beating the crap out of people? Is it loving your family? What if your family doesn’t love you back? What if you lose them anyway? What’s left after that’s all gone?

And if these types of questions bore you, there’s plenty of other stuff to get interested in, from martial arts to French politics and organized crime.

I thought this book would be different from what I usually read, and it was, but I found myself comparing it to an old favourite: Hotel New Hampshire by John Irving. Maybe it’s the (North) Americans in Europe, or the sudden turns of tragedy and violence. Actually, I know what it was. It was this line, as Kruse laments the loss of his daughter and his wife:

He would swim to Europe with them on his back.

It put me in mind of the death of the mom and Egg over the Atlantic, and also that repeated line, “Sorrow floats.” It also made me at once wistful (how romantic!) and cynical (easy to say now, bub.) That’s a lot of stuff going on for ten-word sentence.

The only parts of the book that didn’t work for me were the more outrageous scenes. One involves a vegetable peeler used in creative and disturbing ways, and one involves the shaming of a child abuser. Neither were necessary to my experience of the book, and neither did much for me. I feel like I should have been a lot more grossed out about the vegetable peeler thing, but mostly I was wondering where I could purchase such an efficient utensil. For vegetables, calm down!

So, don’t be afraid. Whether you’re a Le Carre fanatic or and Irving lover or neither of these, if you like moody, thoughtful writing, you’ll like this.

Other reviews worth reading:
Fellow book-clubber Tania of Write Reads
The original Edmonton Book Blogger Kristilyn of Reading in Winter
Laurence Miall (who has a Babiak-blurbed book coming out soon, incidentally) 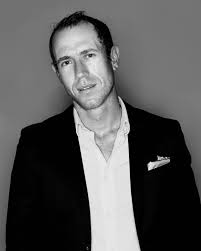 Can you believe we forgot to take a picture? He pretty much looks like this but less intense.

After a little awkwardness and jitters (none of us had done the author-visit thing before) talking to Todd about his book and a million other things was totally natural. We talked about marital arts, acts of kindness, vegetable peelers, and growing up in LA (that’s Leduc, Alberta.) I was most surprised by how autobiographical this book was. I was most nervous about how to talk about the book critically with the author right there but it was no problem at all. He even asked us questions about how authors and publicists should pitch to bloggers, which is always a ripe topic!

Part of Todd’s book club promise is to bring a wine from the region the book takes place in. He couldn’t find the exact one he wanted, but assured us the grapes were the same, whatever that means. It was so good that when I got home, I immediately emailed to find out the name of the wine. It was Bila Haut by Chapoutier. Todd sent me a detailed description of the region and the grapes, which didn’t mean much to me. Bottom line: The first glass tasted like a second glass. I picked it up for $16 at Liquor Select.

The Hummus
This pains me, but the hummus not only displayed limited magical qualities, but it needed more garlic. The texture was good but it wasn’t flavourful enough for me. Sorry Todd!

Watch for book two in the Christopher Kruse series sometime in 2015. Todd would not give us an exact date no matter how much we hounded him.

The next #yegbookclub selection is Waiting for Columbus by Thomas Trofimuk and it sounds amazing.