My latest review for Vue Weekly is up, and I need to write a different kind of disclaimer:

This review is not sponsored and I paid full retail for the book. The author did, however, make me sourdough waffles with homemade preserves. I swear it didn’t affect this review, even though they were the best damn waffles I’ve ever had.

With that in mind, here follows my director’s cut review. Or, click here for the shorter version that appears in Vue.

It’s worth noting the unintentionally hilarious typo in the print headline. Not sure whose fans are rejoicing; Stone Cold Steve Austin’s? 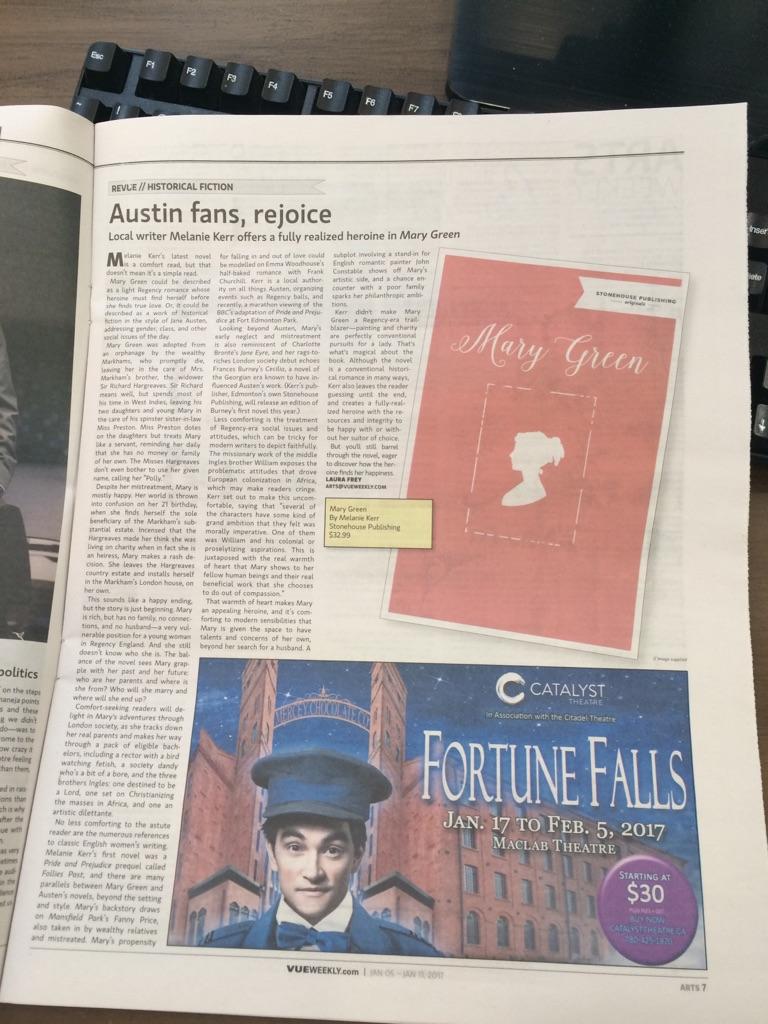 Mary Green could be described as a comfort read, but that doesn’t mean it’s a simple read. Both the novel and the phrase “comfort read” can be taken one of two ways.

Similarly, Melanie Kerr’s latest novel Mary Green could be described as a light regency romance about a mistreated heroine whose unexpected inheritance raises her prospects, but who must find herself before she finds true love. Mary Green could also be described as a work of historical fiction with through lines to contemporary Regency author Jane Austen and to the broader tradition of women’s writing in England in the 18th and 19th centuries, addressing gender and class and other social issues of the day.

Which description of Mary Green is most true depends entirely upon the reader.

Mary Green is adopted from an orphanage at age four by the wealthy Markhams, who promptly die, leaving her in the care of Mrs. Markham’s brother, widower Sir Richard Hargreaves. Sir Richard means well, but spends most of his time in West Indies, leaving his two daughters and young Mary in the care of his spinster sister-in-law Miss Preston. Miss Preston dotes on Sir Richard’s daughters but during Sir Richard’s long absences, Mary is treated like a servant, denied the material and emotional advantages enjoyed by her “cousins”. She is reminded daily that she has no money or resources of her own. The Misses Hargreaves don’t even bother to use her given name, calling her “Polly.”

Mary’s world is thrown into confusion by two events at the novel’s opening: the return of Sir Richard after many years, and his suspicion that something is not right with Mary, and Mary’s twenty first birthday, on which she finds herself the sole beneficiary of the Markham’s substantial estate. Incensed that the Hargreaves made her think she was living on charity when in fact she is a heiress, Mary makes a rash decision to leave their country estate and install herself in the Markham’s London estate, now her own.

This sounds like a happy ending, but the story is just beginning. Mary is rich, but has no family, no connections, and no husband – a very vulnerable position for a young woman in Regency England. And she still doesn’t know who she is. The balance of the novel sees Mary grapple with her past and her future: who are her parents and where is she from? Who will she marry and where will she end up?

Comfort readers will delight in Mary adventures through London society, as she tracks down her real parents and makes her way through a pack of eligible bachelors, including a rector with a bird watching fetish, a society dandy who’s a bit of a bore, and the three brothers Ingles, one destined to be a Lord, one set on Christianizing the masses in Africa, and one an artistic dilettante.

No less comforting to the astute reader are the numerous references to classic English women’s writing. Melanie Kerr’s first novel was a Pride and Prejudice prequel called Follies Past, and there are many parallels between Mary Green and Austen’s novels, beyond the setting and style. Mary’s backstory draws on Mansfield Park’s Fanny Price, also a cousin taken in by wealthy relatives and mistreated by cousins. Mary’s propensity for falling in and out of love could be model led on Emma Woodhouse’s half-baked romance with Frank Churchill.

Looking beyond Austen, Mary’s mistreatment at the hand of an aunt is actually more in line with Charlotte Brontë’s Jane Eyre than Fanny Price. And Mary’s rags-to-riches London society debut echoes Frances Burney’s Cecilia, a novel of the Georgian era known to have influenced Austen’s work. (Kerr’s publisher, Edmonton’s Stonehouse Publishing, will release an edition of Burney’s first novel, Evelina, next year.)

Less comforting is the treatment of Regency-era social issues and attitudes, which can be tricky for modern writers to depict faithfully. The missionary work of the middle Ingles brother William exposes the problematic attitudes that drove European colonization in Africa, and readers will cringe at the dissonance between what Mary’s contemporaries think and how things actually turned out. Kerr creates this dissonance deliberately, to explore the moral goals of men and women in Regency society, saying that “several of the characters have some kind of grand ambition that they felt was morally imperative. One of them was William and his Colonial or proselytizing aspirations. This is juxtaposed with the real warmth of heart that Mary shows to her fellow human beings and their real beneficial work that she chooses to do out of compassion.”

That warmth of heart appeals to the comfort-seeking reader, and it’s comforting to modern sensibilities that Mary is given space to have talents and concerns of her own, beyond her search for a husband. A subplot involving a stand-in for English Romantic painter John Constable shows us Mary’s artistic side, and a chance encounter with a poor family sparks her philanthropic ambitions.

The thing that makes Mary special is not that she is some Regency-era trailblazer – painting, and charity are perfectly conventional pursuits for a lady of her station. The magical thing about Mary Green is that, for a novel that is in many ways a conventional historical romance, Kerr not only leaves the reader guessing about Mary’s fate until the end, but leaves the reader open to different conclusions. Mary is fully realized enough that the reader can imagine her happy with any of her suitors, or none, while making us care enough to barrel through to the end.

Whether read in a day beneath a cozy blanket, or savoured alongside the novels of Jane Austen that served as Kerr’s inspiration, Mary Green brings comfort to readers of all kinds.