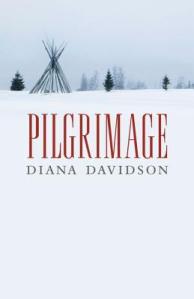 Pilgrimage opens in the deep winter of 1891 on the Métis settlement of Lac St. Anne. Known as Manito Sakahigan in Cree, “Spirit Lake” has been renamed for the patron saint of childbirth. It is here that people journey in search of tradition, redemption, and miracles.

On this harsh and beautiful land, four interconnected people try to make a life in the colonial Northwest: Mahkesîs Cardinal, a young Métis girl pregnant by the Hudson Bay Company manager; Moira Murphy, an Irish Catholic house girl working for the Barretts; Georgina Barrett, the Anglo-Irish wife of the hbc manager who wishes for a child; and Gabriel Cardinal, Mahkesîs’ brother, who works on the Athabasca river and falls in love with Moira. Intertwined by family, desire, secrets, and violence, the characters live one tumultuous year on the Lac St. Anne settlement; a year that ends with a woman’s body abandoned in a well.

Set in a brilliant northern landscape, Pilgrimage is a moving debut novel about journeys, and women and men trying to survive the violent intimacy of a small place where two cultures intersect.

If you ever need a reminder of why access to reliable birth control is so important, read this book. Today, women go on the pill in adolescence and have IUDs inserted as soon as postpartum healing allows. We send our partners to be “snipped” or we go to the corner store and choose from an array of gimmicky condoms of dubious “for her pleasure” claims. One hundred years ago, women were at the mercy of their fertility or lack thereof. Or, more to the point, they were at the mercy of the men that might make them pregnant. Diana Davidson takes us back in time, but not far from home, to tell us about three women whose lives were changed by pregnancy.

The backdrop is a Metis community in turn of the century Lac Ste. Anne, Alberta. Pilgrimage will show you just how much you’ve forgotten of junior high social studies, and make you wonder why we only learn about Louis Riel and The Frog Lake Massacre in grade 7, or 8, whichever it is. If you’re not Canadian, I imagine you’ll have little background knowledge at all. The meticulous research really shines through, and the historical context is reason enough to pick this book up, whether you’re from Alberta or not. This is a period of history that isn’t examined too closely, and certainly not from the perspective of Metis and Irish Catholic women.

I like that Davidson gives us Gabriel’s story too.  Among all these women, his voice felt authentic and not at all forced – no token male here. And his hard slog up north, hauling logs on the Athabasca River, reminded me of David Adams Richards’ stories of the Miramichi:

Gabriel draws lines in the muddy dirt with the sharp end of a broken poplar branch. The poplars are wet, so their black-and-white trunks shimmer green as if they were new – even the oldest branches in the boreal forest. Gabriel wonders if any of the shades of green glimmering off the poplar trunks are close to the colour of an emerald.

Davidson’s style is direct and unfussy, but she writes some beautiful passages, particularly when drawing out the loneliness of her heroines:

Moira stands in the darkness as black as the ocean at night. The nightly ritual of burning a candle in the window to light the way home for those in America made the Murphy’s coastal village look like a blanket of stars fell on it every evening. Moira would just be one more star among many.

Normally, I eat this stuff up: Pregnancy, love, tragedy, historical fiction, and best of all, fully developed characters of both genders.  But I was only really invested in Moira’s story; her romance with Gabriel was sweet and tragic. I found myself troubled by the fact that I wasn’t that interested in Mahkesis. She’s the real heroine, and hers is the greatest journey and transformation.

It might have something to do with an essay I stumbled on in which Chuck Palahniuk challenges writers to do away with “thought verbs” like “think” and “thought.” Show don’t tell, in other words; don’t just tell us what a character is thinking; show us with their actions, or with their dialogue with another character. There are an abundance of thought verbs in Davidson’s writing and I started to notice it around this point, as Mahkesis’ labour starts:

People say a woman’s “water breaks,” she thinks, but whatever liquid is coming from my body is not clean like water: it has a sweet and feral smell.

This line rang false to me, probably because my only thoughts when my water broke were along the lines of “oh shit,” but I found Makhesis was always thinking, or wondering. To be fair, much of the action in Pilgrimage is deliberately internal. None of these women can talk openly about her situation, and their actions are bound by convention and circumstance.  So I asked myself, is my trouble connecting with Mahkesis really just about the way she’s written, or, is there something else going on? Given that I felt a similar disconnect when I read Rupert’s Land, another story set in Alberta and even more directly related to residential school and colonialism, I’m embarrassed to admit that it might be a case of white guilt.

These stories are, and should be, uncomfortable to read as someone living on the same land one hundred years later. In Alberta, it’s still okay to bash Aboriginal people in a way you wouldn’t imagine doing to any other visible minority. Hell, someone made a tasteless “Native” joke at work last week. Got a good laugh, too. And I didn’t say anything. Oh, I was offended, and rolled my eyes, and quickly changed the subject, but I didn’t challenge it. Had it been a sexist joke, I believe I would have.

Pilgrimage made me confront some of my own hypocrisy and complacency. That’s… unpleasant, and building up something small, like the thought verbs thing, is probably a defensive move on my part.

It took some time, and the writing of this review, to make me realize what an achievement Pilgrimage is. It’s a portrait of a time and place we’d like to think of as long past, but as far as we’ve come in terms of reproductive rights, we’ve yet to really confront with the effects of colonialism in Canada. And, Catholics still make the pilgrimage to Lac Ste. Anne every year. Until now, I didn’t even know how close I live to Lac Ste. Anne. I could be there in under an hour.

I would obviously recommend Pilgrimage to anyone in Alberta, but I hope it finds a wider audience among fans of smart historical fiction with a conscious. In the meantime, I need to plan a visit to Lac Ste. Anne and see for myself.

Thank you to the author for sending me a review copy of this book!