Edith Stoker’s father is building a wall in their backyard. A very, very high wall–a brick bulwark in his obsessive war against their hated neighbour Edward Black.

It is 1969, and far away, preparations are being made for man to walk upon the moon. Meanwhile, in the Stokers’ shabby home in the East Midlands, Edith remains a virtual prisoner, with occasional visits from her grotesque and demanding Aunt Vivian serving as the only break in the routine.

But when shy, sheltered Edith begins to quietly cultivate a garden in the shadow of her father’s wall, she sets in motion events that might gain her independence… and bring her face to face with the mysterious Edward Black.

The Insistent Garden is, at first glance, a quiet, contained book, but it contains so much: Coming of age, sexual awakening, mental illness, poetry, and family secrets. Grab a blanket and a cup of tea – it’s a perfect read for the colder days ahead.

Edith’s life stalled when high school ended, and she lives in a household that seems to have stalled sometime in the 1940s – no TV, no washing machine, homemade clothes. While her friends move on to college, Edith is stuck at home caring for her father, who is obsessed with his next-door neighbour and spends all of his free time building a wall between their backyards. Her father’s sister is an evil-stepmother character who ruins at least one of Edith’s days each week with her overnight visits. Her father reads about the moon landing in the paper; the outside world may as well be the moon to Edith.

Chard talks about the claustrophobia of the story in an interview (listen here) but I didn’t feel stifled. The story begins just as the cracks in Edith’s life are starting to show. She only needs to wander a few blocks from home before she starts bumping into a strange group of characters who work together in mysterious ways to reveal the truth about Edith’s long-dead mother, about her father’s obsession, and about her neighbour, Edward Black. Edith’s awakening takes place as the garden she plants in the shadow of her father’s wall takes root.

There are few pop culture references in the book. Edith is cut off from the world with the exception of her mother’s poetry books, and her associates are all too elderly to give us a taste of the late 60s. The book has a timeless feel, and far from feeling cut off from culture, it suggests more connections every time I think about it.

There are obvious links to classic children’s stories like The Secret Garden and Alice in Wonderland. The Alice allusions were particularly strong. Edith’s Aunt is the Queen of Hearts, obsessed with the colour red and unrelentingly evil. I was getting vibes from adult lit too: The awful father and evil relatives reminded me of Angela’s Ashes (yeah I know it’s non-fiction, but still) and Edith’s father obsession with the wall was classic Ahab (trademark SarahNRaymond):

The garden was quiet, punctuated only by the creak of the ladder and the occasional grunt from above, but the rhythm was soothing, so soothing that a question slipped from my mouth. “When will it be finished?”
The trowel paused. “When will what be finished?” A comma of mortar flecked my arm.
“The wall.”
“When it’s done.” A full stop dripped to the ground.
“Is it. . . safe?”
He looked down at me, the skin of his cheeks puckering beneath his eyes. “He might be standing on the other side of the wall at this moment. Do you realize what that means?”
I squeezed the rails of the ladder. “The wall —”
“Yes, the wall!” he thundered. “That’s what makes you safe.”
I gripped the ladder more tightly then looked away. The accusatory ‘you’ was a powerful beast.

I love the way Chard uses big symbolism – colours, flowers, animals – to describe a life that’s lived on such a small scale. In a way, it reminded me of Wuthering Heights, which also employs big, heavy symbolism. And like Catherine Earnshaw, Edith’s sadness and isolation broke my heart:

I stared into the dark. Two living, breathing, people shared my house, heat seeping constantly from their bodies, yet every room was always cold.

Edith’s story eventually picks up into a murder mystery, and I found myself flipping ahead pages to make sure she was okay.  My complaints about The Insistent Garden are mostly related to wanting to know more. I want to know more about her father and Aunt and how they became this way. That knowledge may have saved the ending, which for me, was a little too neat and tidy. But I especially want to know what happens to Edith – can she really break free of the past?

A last point on pop culture allusions: Matt at NeWest Press described the book as “Coronation Street meets Edward Scissorhands,” which I was dubious about at first. The Corrie connection is obvious (well, if you watch Corrie, anyway,) but Edward Scissorhands? I didn’t get it till the end. I can’t spoil the big reveal, but when it happens (and you’ll know,) this is how I felt: 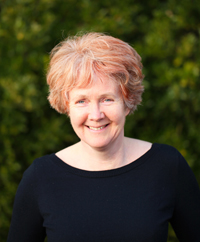 About the Author and Q&A

Rosie Chard grew up on the edge of the North Downs, a range of low hills south of London, UK. After studying Anthropology and Environmental Biology she went on to qualify as a landscape architect at the University of Greenwich and practiced for several years in England, Denmark and Canada. She and her family emigrated to Winnipeg in 2005 where she qualified as an English Language teacher at the University of Manitoba. She is now based in Brighton, England where she currently works as a freelance editor and language teacher. Her first novel, Seal Intestine Raincoat, was published in 2009 by NeWest Press; winning the 2010 Trade Fiction Book Award at the Alberta Book Publishing Awards, and receiving an honourable mention for the Sunburst Fiction Award. She was also shortlisted in 2010 for the John Hirsch Award for Most Promising Manitoba Writer.

Also check out Rosie’s blog, particularly this post with beautiful pictures of the real Snowhill garden.

Rosie kindly answered my questions about the book. We have similar tastes in books and she has inspired me to finally tackle Murakami!

Did any authors or books influence The Insistent Garden?

For writing in general George Orwell and Sylvia Plath are constant sources of inspiration. Whenever I get stuck it often takes only a flick through the pages of Orwell’s 1984 or a glance at ‘The Journals of Sylvia Plath’to get things moving again.

I never intended to write a novel with a gothic feel to it but now the book is finished I see many of the elements are there: the vulnerable heroine, the setting as a character, and something unseen lurking nearby. Looking back, I can see that the darker characteristics of the novel were influenced by enigmatic books that have really got beneath my skin:  Strange Case of Dr. Jekyll and Mr. Hyde, (Stevenson) The Picture of Dorian Gray, (Wilde) and The Turn of the Screw (James). The poems of Edgar Allen Poe, with his emphasis on the psychological side of characters, also had great resonance for the book.

The part played by the landscape was also integral to the novel and I imagine this was affected by my readings of books such as Wuthering Heights, Tess of the D’Urbervilles and The Secret Garden, but this aspect was mainly influenced by my many years working as a garden designer.

Finally, I love the surreal, and Murakami’s The Wind up Bird Chronicle has probably had more influence on my writing than any other book.

What genre would you say the book belongs to? I couldn’t decide if it was a mystery, a fairytale, or a coming of age story (of course it could be all three!)

I think the book is hard to classify and when I hear people’s thoughts on possible genres it always surprises me, although I am delighted that the book is perceived in a variety of ways. It is certainly gothic in tone, and definitely a mystery, but not in the traditional sense. It is also a coming of age story, but again, not in the way you might expect. To be honest I cannot put it into any particular category and think I prefer it that way.

Why did you choose the late 1960s for Edith’s story? Was it because modern technology would make Edith’s isolation less likely?

The first draft was written as ‘now’ as my initial research concentrated on the current wave of large-scale wall building that is sweeping the world and the general madness of borders, but as I started the second draft I felt myself being drawn back to an earlier era, one that was almost black and white in my memory, with the occasional splash of colour.  Although the 1960’s, with the rise of feminism and moon exploration, was a time of liberation and adventure, I became interested in those women who were not swept along with the changes, the ones left behind.

You’ve probably heard that Matt referred to your books as Coronation Street meets Edward Scissorhands. So I must ask, are you a Corrie fan?

Although certainly not immune to the pleasures of soap operas I have never watched Coronation Street, although I am an avid fan of The Sopranos (if it can be classified as such!) and I have always loved the contribution a gossip can make to a story. Comparison with Edward Scissorhands is a great compliment. I find the idea of strange things going on beneath a seemingly normal surface endlessly fascinating.

What are your favourite classic novels?

Thank you to Rosie for participating, and to NeWest Press for the review copy of this book!