Why am I reading this? That’s question I’ve asked myself a few times. Be informed: Sign up post

I have been getting pretty personal on the blog lately. Here I go again! Rather than go snarky this week (which fellow read-alongers have got covered, and they do it so well,) I’m going to talk about the bits that made me uncomfortable.

My first couple of serious relationships were emotionally abusive. At the time, I would have said the same things Pia says about Dragos, “he’s controlling” or “he’s just really jealous,” and of course “it’s just because he loves me so much.” These “rules” are really familiar to me:

I’ve been reading reviews on Goodreads and they’re full of women swooning over how Dragos is so “alpha” and “possessive” and “stalkerific” and I’m going to assume none of these women have been in an actual relationship like this, or else they’re still stuck in one, because it’s not fun, it’s not romantic, and it is abuse.

Okay. Let’s not end on a heavy note. The Good, The Bad, and The WTF worked pretty well last week, so let’s go: 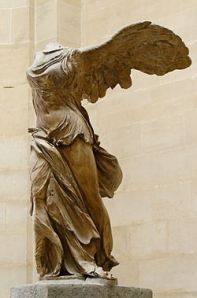 The Winged Victory of Samothrace

Tune in next week for the merciful end.