This event had me confused for months. I finally found out that it’s a sort of teaser for next year’s Festival of Ideas at the U of A (which will be headlined by Twitter-infamous Joyce Carol Oates.) For just $50, you could listen to Margaret Atwood and Alanis in conversation about “Life. Love. Art” as per the promotional material. That’s pretty vague, and I had no idea what to expect.

The books editor for the Globe and Mail attempted to moderate the conversation, but he was a little out of his league. I have a problem with vicarious embarrassment and I was starting to squirm as both women pretty blatantly ignored him. Thankfully, Atwood took over handily and dominated the conversation throughout.

Alanis seemed starstruck, Atwood bemused – very true to her reputation as one who gives few, if any, fucks. My favourite bit was when Alanis tried to toss off a cute remark, “and that’s why I started my own record company when I was ten!” and Atwood grilled her: “how did you do that? What did you do first”? Did you put out a record? Then what?” and it was impossible to tell if she was genuinely interested or subtly calling bullshit, but I pretended it was the latter.

Much of the talk concerned the creative process – how it’s different for music versus books, vulnerability, autobiography (or not,) and it was fairly interesting, if a bit predictable. They also addressed their roles as trailblazers for female (song)writers. I’ve always found it strange that Alanis is presented as a trailblazer because when Jagged Little Pill came out I was listening to Hole and Garbage and wearing homemade Riot Grrl t-shirts, and Alanis seemed so sanitized, movie theatre blow jobs notwithstanding. In my experience, people who listened to JLP were the same people that listened to, like, Hootie and the Blowfish.

It’s somewhat tough for me to appreciate Atwood’s trailblazer status too, being just a kid when The Handmaid’s Tale was released, and not crediting it with my awakening as a feminist – just bad timing, I’m sure (I happened to read The Beauty Myth by Naomi Wolf years earlier, and that’s the one that opened my eyes.) Atwood, as I expected, dismissed the designation all together, saying that it was so hard out there for a Canadian writer back in the day that she barely had time to register the difficulties of being female.

Alanis bemoaned the sexualization of female artists (yep, Miley was mentioned) and the over-commercialization of music; and I swear it was a coincidence that I noticed her pristine Louboutins while she was saying something about how it’s not all about the money. I don’t deny her the right to comment as such but it was kind of ironic. I think. Am I using that word right?

Overall, Atwood was deadpan funny, sharp, and just a smidge more self-deprecating that I expected. I could have listened to her talk much longer. I wanted to hear more about Maddaddam and what’s next. Alanis was alright, but speaks in this weird, half hippy, half business-speak lingo that was setting my teeth on edge. She kept using the word “serviceful,” meaning serving your community (or something) – why not just say “serving” or “being of service?” Then she went and misused “begging the question” which is a pet peeve of mine. As far as I’m concerned, most people use that expression to look smart, and 90% of them use it incorrectly. Isn’t THAT ironic?

Ms. Atwood must have stayed two hours after the event to sign books, and she was gamely chatting and taking pictures (I was too scared to ask!) I didn’t think there would be a signing and didn’t bring my own books – major disappointment. I bought a copy of Cat’s Eye and one of the Winspear staff told me she hadn’t seen anyone else with that book for signing, so at least I was original in my failure. 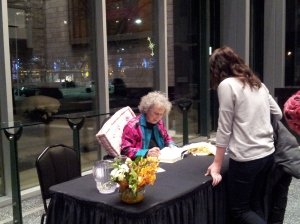 Photo Credit: My sister who stood in line with me for an hour and a half! 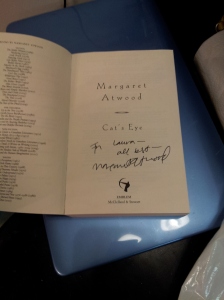 I was more blown away by Atwood’s stamina than the event itself, but I’m so grateful that I got to meet a true heroine of CanLit.