Fair travelers, journey to the master post if thou art lost.

It’s all happening for Cecilia this week! Our Frances vs. Fanny discussion is still going strong in last week’s post. Rick of Read the North pulled some of Burney’s sickest burns in his Book I wrap up. Much discussion about who should be cast in the roles of Mortimer Delvile took place on Facebook and Twitter. I’ll get you caught up with all that in a minute. But first, this happened: 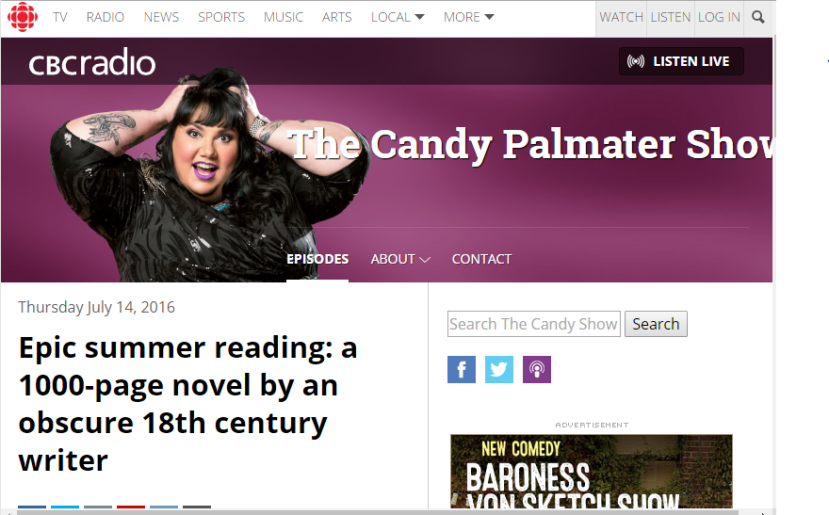 I’m still not sure why, after years of blogging about live Canadian authors, I got called by the CBC for blogging about a dead British one, but, I’ll take it. Have a listen here. Welcome CBC listeners: if you’re reading with us, please say hello in the comments!

Cecilia, having resolved to get the fuck outta the Harrell’s house at the end of Book I, goes to meet her other guardians, one “A Man of Wealth”, one “A Man of Family”, both just as terrible as the Harrels. Disappointed, Cecilia sits tight and comforts the Hills, the poor family who opened her eyes to the evils of her fashionable friends. At the end of these chapters, we leave Cecilia buying books to console herself and passing the hours “serenely in innocent philosophy” – if only she had a blog!

Chapter three is my favourite so far. Cecilia helps the Harrels host a masquerade party and it is completely bonkers. The country dances of Jane Austen are very quaint and all, but masquerade parties are something else – totally unfamiliar in terms of the proceedings and the costumes, and yet, some very familiar human behaviour is on display. Cecilia’s suitors have been circling like vultures since page 1, but at the party, one “devil” quite literally circles her and prevent her from leaving.

Waving this wand as he advanced towards Cecilia, he cleared a semi-circular space before her chair, thrice with the most profound reverence bowed to her, thrice turned himself around with sundry grimaces, and then fiercely planted himself at her side.

But the party don’t start till Don Quixote walk in:

…bending down his head, he kissed the floor; after which, raising himself upon his feet, he proceeded in his speech.

“Report, O most fair and unmatchable virgin! daringly affirmeth that a certain discourteous person, who calleth himself the devil, even now, and in thwart of your fair inclinations, keepeth and detaineth your irradiant frame in hostile thraldom.”

After being further accosted by a chimney sweep, a “Turk” (casual racism: just part of the fun) and several others, a mysterious “white domino” finally saves the day. Well, that, and a diversion in the form of a Harlequin swinging from a chandelier.

Hands up if you pictured this while reading. “Domino” just means a robe and a mask, apparently!

I’m not going to tell you who’s who, because that’s why this chapter was so fun. I was as confused as Cecilia. I also had flashbacks to every cheesy Halloween pub crawl I went on back in the day. What is it about costumes and people being assholes? This chapter went from funny to ridiculous to… something past that, but somehow it still worked.

We haven’t even gotten to the duel yet. After the party it’s the after… no, it’s the opera, and Sir Robert & Mr. Belfield get into a fight about who gets to hand Cecilia into her carriage. A simple glove slap isn’t enough to settle things, and despite Cecilia’s attempts to manipulate the situation, they do indeed duel, and Sir Robert gives Mr. Belfield a pretty bad flesh wound. Cecilia lets everyone down by not falling for either the victor or the injured party, either of which would have satisfied the gossips.

We’re only halfway through Book II, by the way.

The second half is a little calmer. Cecilia finally find a use for the most besotted of her suitors, Mr. Monckton and Mr. Arnott, and uses them to get information on Mr. Belfield’s condition. She also finds out that the white domino is none other than Mortimer Delvile, son of her “Man of Family” guardian. Cecilia finds a true friend (as far as I know, anyway) in Mortimer’s mother Mrs. Delvile, and Mortimer himself emerges as a likely love interest, though this dueling business is going to cause complications for some time to come – I almost forgot that Sir Robert proposed to Cecilia in this Book, it’s so completely unromantic.

Modern Life in the 18th century

Text speak: The next time someone complains that kids these days only speak in incomplete sentences and impenetrable slang due to too much texting, please direct them to Mr. Briggs.

“Ah ha!” cried the chimney-sweeper, significantly nodding his head, “smell a rat! a sweetheart in disguise. No bamboozling! it won’t do; a’n’t so soon put upon. If you’ve got any thing to say, tell me, that’s the way. Where’s the cash? Got ever a rental? Are warm? That’s the point; are warm?”

Jennifer Aniston would be so disappointed: Anyone who reads gossip knows that female celebrities are endlessly scrutinzed in terms of their fertility and marriage prospects. The fashionable young men at the opera are no different:

…for these gentlemen, though as negligent as the young ladies had been whom they disturbed, were much more cautious whom they instructed: their language was ambiguous, and their terms, to Cecilia, were unintelligible: their subjects, indeed, required some discretion, being nothing less than a ludicrous calculation of the age and duration of jointured widows, and of the chances and expectations of unmarried young ladies.

Still not having too much trouble reading the 18th century language, but there are a few details I’m missing:

Did you laugh out lout while reading A Masquerade? Or was it a little too real? Did you picture a literal domino?