I’m pretty much recovered from last year’s celebrity encounters with Joseph Boyden and Joyce Carol Oates, so it’s time to get star struck again! Recently I met a few celebrities and made plans to meet another. Let’s review.

1. Gwyneth Paltrow
Calm down, I didn’t actually meet GP. But I did attend the launch party for Is Gwyneth Paltrow Wrong About Everything by Tim Caulfield and she was there in spirit, and also in cardboard cut-out form. At one point, the line up to take a “selfie” with 2D Gwyn was longer than the line to talk to the author. At this point pretend I say something profound about celebrity culture. 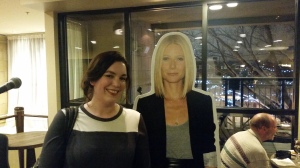 2. Tim Caulfield
The real reason I was there, Tim Caulfield is an author, the Canada Research Chair in Health Law and Policy, a father of four, and a local celebrity himself.

I can hardly call this a book launch. It was a fete. There was catering, live music, and free drinks. And it was weird being at a book thing without any book people – they were all University and health care types. Good thing I brought my sister as my date. She used to plan health care conferences and recognized many of the attendees as former speakers and delegates, including Caulfield. They didn’t recognize her though, and she wanted to keep it that way, so we retreated to a corner and she gave me the dirt on who’s a nightmare to work for and who only has their job because of family connections and so on. Just like celebrity gossip! With fewer nude leaks.

On Caulfield himself? “Everyone loves him. Especially women.” From what I saw that night? Absolutely true!

I’ve read the first chapter of the book, and I love that Caulfield is an unabashed consumer of celeb culture himself. It isn’t about scolding people, or looking down on the masses who read Star magazine. It’s about examining the reasons we trust celebrities in ways that we don’t trust scientists or ourselves. I do hope there’s some level of feminist perspective in the chapters to come, as a large portion of the type of health & beauty advice Caulfield’s writing about comes from female celebrities and is aimed at female consumers. We shall see.

This book’s going to be huge. The timing couldn’t be better, what with vaccine debates back in fashion (seriously, it’s like a parenting forum exploded all over the internet) and GP-endorsed uterus steam cleanings.

3. Jonathan Frazen
I know, I know. No one wants to hear a book blogger rant about Jonathan Frazen right now. But in writing about Goopy, I realized that she and JFranz are hated for the same reasons:

Speaking of self promoting, Franzen is headlining Book Expo America this year which is the main reason that I’m attending. Yes, I booked my flight on the very day that Franzen’s latest outrageous interview came out! It’s like he knew. Now, to try and get a selfie with him. Perhap there’ll be a cardboard cut-out for me to practise on.

Who’s the biggest celebrity author you’ve met? And bloggers: are you going to BEA this year?