Three months ago, I didn’t know what “booktube” meant. I was aware on some level that vlogging existed, and some vloggers must talk about books; and that sometimes book *bloggers* made videos, but I didn’t realize it was its own thing. That it’s not just an offshoot of book blogging, but has its own (much discussed, of late) culture.

Since making this momentous discovery, I’ve found a few booktubers that I really enjoy.  It’s hard to keep up, though. Book blogs are easy to follow because it’s quiet, I can do it surreptitiously, and I can quickly scan a post to see if it’s of interest. With booktube, it’s loud, I can’t multi-task, and a five minute video takes five minutes to watch. I can’t browse it or scan it.

Despite these drawbacks, I feel like the medium is gaining momentum. I don’t have any stats to back me up, but I get the feeling that book blogs have reached some critical capacity; there are too many for the system to support. Booktube, on the other hand, is new and shiny and YOUNG. My goodness it’s young. And judging by the drama that’s going around the community, it’s growing.

1. Flailing. My number one criteria for following a booktuber is a soft, calm speaking manner. I don’t need you to be Ben Stein, but I watch booktube late at night, after a long day with a toddler and a preschooler, so the last thing I want is to be SHOUTED at, squealed at, or flailed at. There’s… a lot of flailing on some of the popular channels. Be warned.

If I want to see flailing, I will watch Nicolas Cage in Face/Off. Or anything.

2. Book reviews are tough to find. Booktube is big on “hauls,” but I’m more interested in how booktubers translate reviews, which I’m used to reading, into interesting videos. I really like videos that fall somewhere between a haul and a review: a themed group of mini-reviews.

3. Booktubers have tons of followers and videos get a lot of views. More so than blogs, I would say. I’m not sure if that’s because the blogosphere is saturated and booktube is new, or what.

4. Diversity. It’s no secret that that book blogging is dominated by young white women. I’m noticing more diversity on booktube, maybe because it’s, well, visible. I think booktubers skew even younger than bloggers though, and I don’t think I’ve found ANY parents yet. There are plenty of us book bloggers with young kids, but not so much on booktube. It makes sense; the logistics of having the time, space, and quiet to make a video, let alone look presentable, are pretty daunting.

5. Booktubers tend to have GREAT hair. And skin. And make up. I think there’s some cross-over potential with Beauty YouTubers. I would totally watch a “get ready to film your next book haul” hair and makeup tutorial. 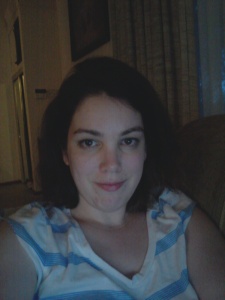 How I roll: PJs, couch, 11:00 p.m. on a Friday, flattering laptop screen lighting. NOT ready for my close-up.

Bonus #6: I hate the word “booktube.”  It sounds gross. “Booktuber” is even worse, it makes me think of a potato.

Bazpierce: Hilarious, snarky, obsessed with classics. He went on hiatus just as I subscribed, and I may have audibly squealed when I saw this come back video. Oh, and his commentary on the recent booktube drama-llama is perfect.

The Heavy Blanks: Great hair. Great voice. Tons of CanLit. Very thoughtful. Oh and he’s local! I promise you haven’t seen a haul like this:

Ron Lit: She is hilarious and smart and talks about all the dirty bits in the classics. Here’s a good example:

Words of a Reader: Great taste in classics. Owns the A Tree Grows in Brooklyn t-shirt. Just hit 10K subscribers and is doing some cool stuff to celebrate:

Climb the Stacks: Solid reviews and discussions of contemporary books. This recent video makes me want to read all these books and cry for days (well not The Poisonwood Bible, didn’t like that one at all!)

Librarian FanMail Another CanLit superstar! I loved her review of Edi Edugyan’s Dreaming of Elsewhere.

Oh yeah, remember that time I made a video? Also, tell me about your booktube experiences!